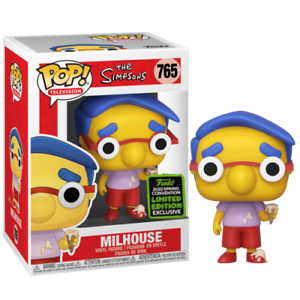 Ever wanted a Pop! Vinyl that looks like a dud? Well, look no further than Funko’s cromulent new Simpsons release; the Thrillho… I mean, Milhouse Pop! Vinyl Figure!

He may be allergic to honey, wheat, dairy, mistletoe, holly, the red parts of candy canes, as well as his own tears, however there isn’t a Simpsons fan alive who doesn’t love Milhouse. He not only taught us how to go crazy Broadway style, but also why it’s important to say “god bless you” every time you sneeze.

This Pop! features Milhouse with his trademark blue hair and red glasses, attempting to enjoy a tasty ice-cream, although unfortunately things haven’t gone to plan. Doh!

Embiggen your collection with the Milhouse Pop! Vinyl Figure today.