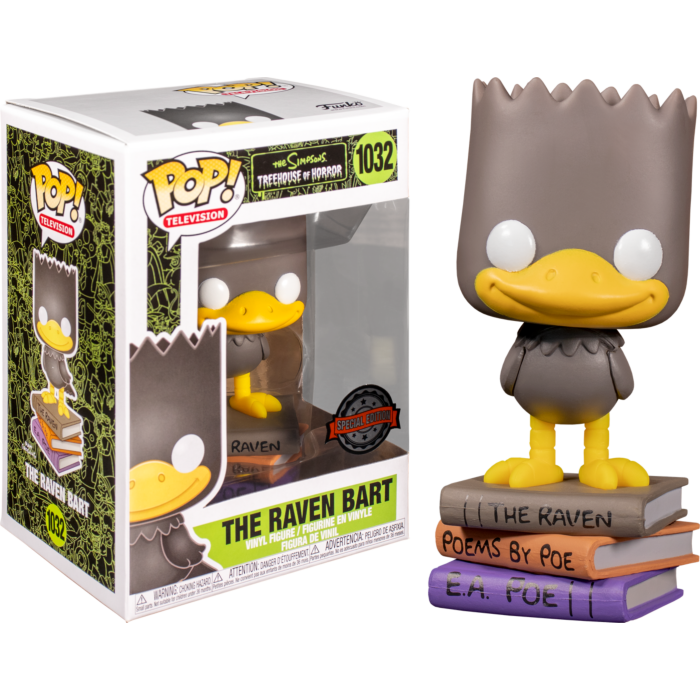 The Simpsons - Bart as The Raven Pop! Vinyl Figure

SKU 03481
AU$17.50
In stock
1
Product Details
The Simpsons - Bart as The Raven Pop! Vinyl Figure
It's the annual tradition every Simpsons fan can't wait for, where our favourite four-fingered family step outside the normal parameters of reality and terrify us with three bone-chilling (yet hilarious) horror stories to celebrate Halloween. It's of course the Treehouse Of Horror specials!

Yes there's no denying that The Simpsons is one of the greatest television shows of all time, giving an entire generation of Australians an alternative to the 6pm news report. Remember the days of being glued to the TV watching Simpsons marathons when boring stuff like the Olympics were on the other channel? Those were the days.

Well Funko's cromulent new wave of Simpsons Treehouse of Horror Pop! Vinyl figures are here and they are sure to embiggen your lives! Included here we've got Zombie Bart riding his skateboard, as well as Bart & Maggie in their Alien cosplay (complete with Chestburster), Homer as the Grim Reaper from Reaper Madness, Vampire Krusty from Terror in Tiny Toon, Marge as the Witch from Easy Bake Coven, Homer as the Jack-in-the-Box from Bart's Nightmare, as well as the incredible Devil Flanders from The Devil and Homer Simpson.

Now that' the standard wave, however what we have here is arguably the greatest Simpsons Pop! Vinyl to date... Donut Head Homer!

Not only is this one of the most iconic versions of Homer of all time, but's it's just so sweet and tasty, you won't be able to resist.

Don't forget to also look out for the Exclusive Bart the Raven!

So do you wish to look as happy as me? Well, you've got the power inside you right now. So, use it, and send your dollarydoos to Popcultcha, Geelong, Victoria. Don't delay, eternal happiness is just a Simpsons Pop! Vinyl away.n!th.