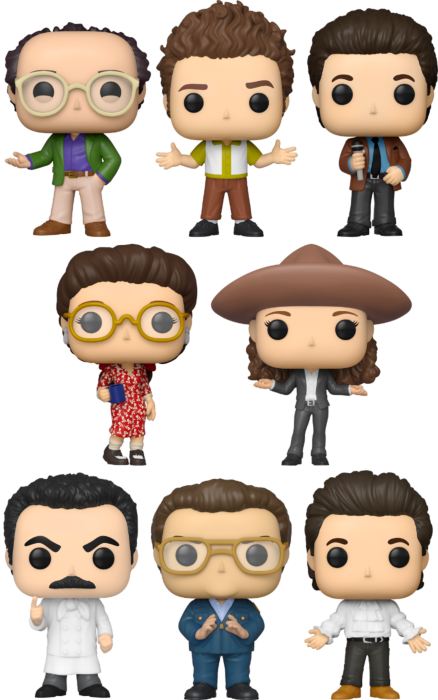 Seinfeld - What’s The Deal With This Pop! Vinyl Figure

"What’s the deal with Funko?"

This is the question Seinfeld fans have been asking themselves for years, however now their prayers have finally been answered with Funko’s sponge worthy new range of Seinfeld Pop! Vinyl Figures, featuring many of your favourites from the iconic series.

Originally running from 1989-1998, Seinfeld would go on to become the #1 rated show on television, defining a generation of comedy and changing the landscape of sitcoms forever. Whether it’s “yada, yada, yada”, “not that there’s anything wrong with that” or “no soup for you!”, Seinfeld provided us with so many quotes that became part of our everyday vocabulary, and now we can relive all of those show’s classic moments with this hilarious new wave of Pop! Vinyl Figures.

Featured in this wave are all the main stars including George Costanza, (who does in fact still live with his parents), Elaine Benes in her dress, as well as Elaine wearing her famous urban sombrero from “The Foundation”, Yev Kassem (aka the Soup Nazi), everyone’s favourite mailman Newman, Jerry wearing the hilarious puffy shirt, as well as Jerry doing his stand up routine from the show’s intro. Oh and let’s forget the K-Man himself… Kramer!

Don’t forget to look out for the wide-range of Exclusives including Kramer in his underwear, Jerry with PEZ dispenser, George with purple face, plus our absolute favourite… The Kramer Pop! TV Moment!

Seinfeld may have been the show about nothing, but these Seinfeld Pop! Vinyl Figures mean EVERYTHING. Ensure a life of serenity by adding them all to your Funko collection today.