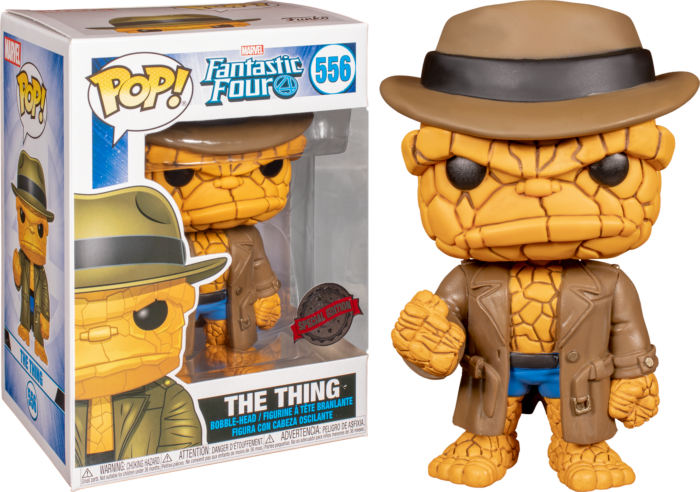 You know I’m sure you think your Funko collection is pretty awesome. Heck, you may even think it’s amazing. But when you look in the mirror and really ponder about it, can you truly say your collection is FANTASTIC? Well have no fear because Funko’s new wave of Fantastic Four Pop! Vinyl Figures are here to put all doubt to rest.

Debuting in 1961 in The Fantastic Four #1, the very first comic released by the legendary Stan Lee and Jack Kirby, The Fantastic Four consists of four individuals who gained superpowers after exposure to cosmic rays during a scientific mission to outer space; Mister Fantastic, a scientific genius and the leader of the group, who can stretch his body into incredible lengths and shapes; the Invisible Girl, who eventually married Reed, who can render herself invisible and later project powerful invisible force fields; the Human Torch, Sue's younger brother, who can generate flames, surround himself with them and fly; and the monstrous Thing, their grumpy but benevolent friend, a former college football star and Reed's college roommate as well as a good pilot, who possesses tremendous superhuman strength, durability, and endurance due to the nature of his stone-like flesh.

This wave not only features all four main characters, but also a host of villains to keep them busy including Mole Man, Galactus, Super Skrull, as well as the infamous duo of the Silver Surfer and Doctor Doom. However don’t panic, since the Fantastic Four’s robot sidekick H.E.R.B.I.E. has also arrived to help save the day.

Now whilst that's the regular wave, there is also an exciting range of exclusive Fantastic Four Pop! Vinyl Figures, including this The Thing, featuring him wearing his not so subtle disguise.

An incredible wave of Pop! Vinyl Figures that are a must for any true marvel fan. Add The Fantastic Four to your Funko collection today!