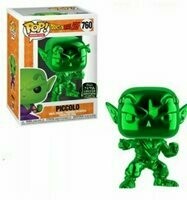 Here we have the evil Piccolo, who comes complete with a stunning Green Chrome finish as he truly gets into the Emerald City spirit!