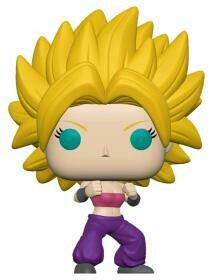 A sequel to the Dragon Ball manga and Dragon Ball Z television series, Dragon Ball Super follows the adventures of the protagonist Goku after defeating Majin Boo and bringing peace to Earth once again. Four years later, Goku attains the power of a god and faces more challenges. He defends the Earth against powerful destructive deities and travels to parallel universes to face more powerful opponents and nearly unstoppable foes. Dragon Ball Super reveals the events of the ten-year time skip following chapter 517 of the original manga.

Funko's new wave of Dragon Ball Super Pop! Vinyl Figures unleashes some old favourites as well as some brand new characters into your Dragon Ball collection; we've got Gohan launching through the air, Vegeta looking pretty casual, the leader of the Resistance, Future Mai, the leader of the gang of Saiyan criminals, Super Saiyan Caulifla, Hercule (aka Mr. Satan), complete with that incredible moustache, as well as the first ever female Saiyan... Super Siayan Kale!

So as you can see, this may be the greatest wave of Dragon Ball Super Pop! Vinyl Figures to date, so don't miss out on adding them to your collection!