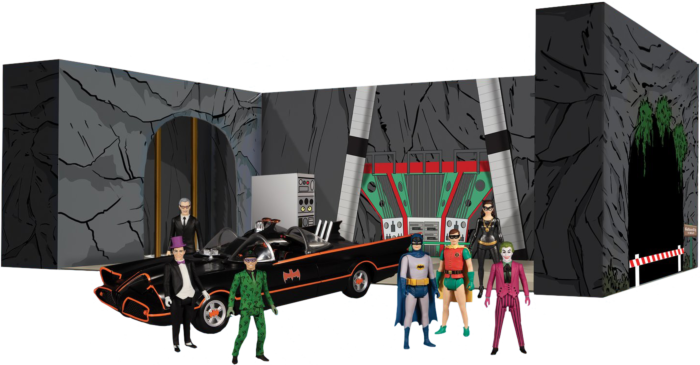 With a whopping 7 figures that feature interchangeable heads and accessories, as well as the Batmobile and a Batcave/Wayne Manor diorama setting, you can recreate all of your favourite moments from the show as the fan-favourite crime-fighting duo take on Gotham’s most notorious villains.

Each figure in the series has been designed in Mezco’s unique 5-Points style, which blends modern articulation with the look of yesteryear for detailed action figures with a retro twist, including Batman, Robin, Alfred, Catwoman, The Penguin, The Riddler, and The Joker.

This incredible set also features a Batmobile vehicle accessory, featuring two seats that Batman and Robin can sit in, rotating wheels, a retractable buzz saw that is activated via a button on the windshield, and an attachable rocket flame for when your atomic turbines are powered and you are ready to roll out!

With the Batcave/Wayne Manor diorama you can create multiple action environments with Batcomputres, Batpoles, and all the Batcave details as seen on the show, making it the perfect set for any nostalgic Batman fan.