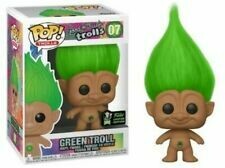 It's hard to imagine a world without Trolls. No, not those ugly, evil creatures that live beneath bridges, I'm talking about those adorable dolls that sport wacky hair. You see long before the world was blessed with Funko Pop! Vinyls, the biggest fad in the world was collecting Troll Dolls. How many different hair colours did you own?

Well, for the first time, Funko have opened the door and joined forces with Troll Dolls, releasing an exciting new wave of Good Luck Trolls Pop! Vinyl Figures to add to your collection. What makes them ever more unique is that they feature real hair, just like the original Troll Dolls!